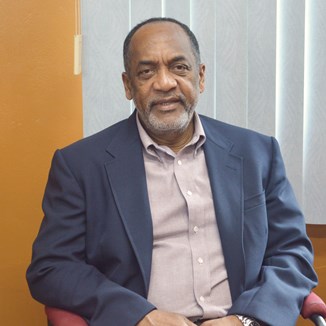 Aptly headlined by one writer as “A Guyanese Engineering Giant”, Dr. Vincent Adams came a long way to becoming a Guyana national cricketer; a Petroleum expert advising the Guyana Government; a member of the Senior Executive Corps, comprising the highest-ranking civilians running the day-to-day operations of the US Government in the Department of Energy (USDOE); the Visiting Distinguished Engineer at the University of Guyana, leading the establishment of the newly inaugurated Petroleum Engineering Department at the University to prepare for first oil in 2020; and now Head of Guyana’s Environmental Protection Agency (EPA).

Dr. Adams has the unique distinction of being an expert in both the environmental and petroleum fields. As a Senior Petroleum Reservoir & Production Engineer for 6 years with AMOCO (now BP), he conducted pioneering work now widely used in the industry for enhancing oil & gas recovery. During his 30 years with the USDOE, he led Multi Billion Dollars environmental and energy projects & programs including: cleanup of the nation’s nuclear weapons complex; developing technologies and standards at over 20 world class National Laboratories and Universities; creating and managing the Government’s Science, Technology, Engineering & Math (STEM) programs at 9 Universities; US expert to the International Atomic Energy Agency on project management, and technology and standards development; transformation of nuclear weapons technologies into applications for medicine, greenhouse gas curtailment, and fuel cells; developing the equations that model the state of art Ionizing Wet Scrubber System for air pollution control; and formulating partnership programs with private companies for building capacity and local content.

Dr. Adams commands the respect of his peers worldwide. He transformed two US Federal Departments to becoming High Performing Organizations; received the prestigious 2012 President’s Award for contributing the most to education in the State of Ohio. He led and Chaired several international Engineering & Science Conferences and Professional Organizations, including Chairman of 2 major International conferences; and Chairman of the Southern Section of The Air & Waste Management Association - the pre-eminent environmental professional organization with over 10,000 members, internationally.

As Head of Guyana’s Environmental Protection Agency (EPA) for the past nine months, Dr. Adams has aggressively been building and restructuring the Agency to meet the extraordinary challenges which it currently faces, including its very limited capacity, especially for regulating the oil & gas industry. He is a key leader in establishment of the new Petroleum program at the University of Guyana to prepare for first oil in 2020.