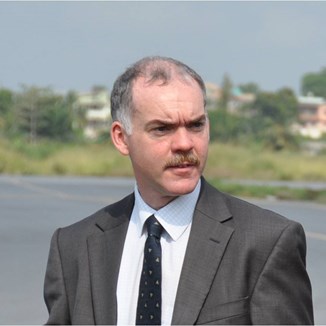 Jerome Kelly presently holds  a position in Tullow Oil Plc Ireland as Exploration Manager South America - Carribean. He joined Tullow in 1993 and has worked in many regions of the world including, Syria, India, Pakistan, Bangladesh, Cote D’Ivoire and Ghana, as well as more recently, Guyana, Suriname, Jamaica, French Guiana, Uruguay and Peru. After doing a Masters Degree in Petroleum Geology from University College Dublin in 1989, he joined CGG until 1990 and later he joined Sun Oil E&P Ltd as an explorationist where he remained until 1992.  He has been involved in many of the key exploration moments in Tullow Oil over the years. From 2006-2012, he headed up Tullow’s global peer review group and, as a result, had sight of all of Tullow’s prospects during that period.